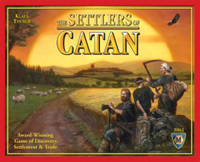 Settlers rounds will be played using the base Settlers game. A random setup of tiles will be produced by the judge just prior to the commencement of each round.

All of the following rules are additional rules to the Catan Standard rules. Where contradictions occur refer to the rules laid out below, as used in the Catan Australian Championships 2006.